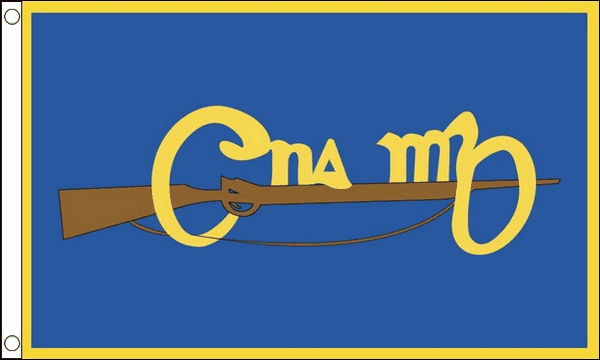 Cumann na mBan was a women's republican paramilitary organisation formed in April 1914 during the Home Rule crisis. Cumann na mBan fought in the 1916 Rising notably in the GPO and St Stephen's Green.

During the War of Independence volunteers from Cumann na mBan played a vital role providing logistic and intelligence to the IRA. its members were frequently able to avoid suspicion as Crown forces assumed women were not be actively involved in the war.

The organisation overwhelmingly rejected the Treaty and supported the Anti-Treaty side in the Civil War with several members incarcerated during the conflict.

The flag depicts the letters C na mB in yellow resting on a rifle set on a blue background.