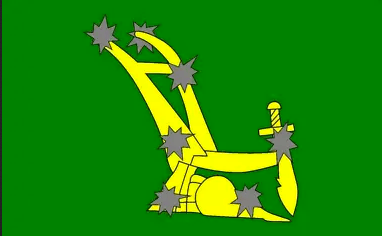 The Starry Plough was the flag of the Irish Citizen Army who fought in the 1916 Rising. The flag was unlike any other used in Ireland and is made up of an agricultural plough with the star constellation Ursa Major (also called the Great Bear or Plough or Big Dipper) superimposed upon its structure.

The original flag had a gilt edge, green background while the plough itself was yellow and the stars silver. In the year leading up to the Spanish Civil War, Republican Congress (many of whose members fought in the conflict and feature in the series Partisans) used a version of this flag.