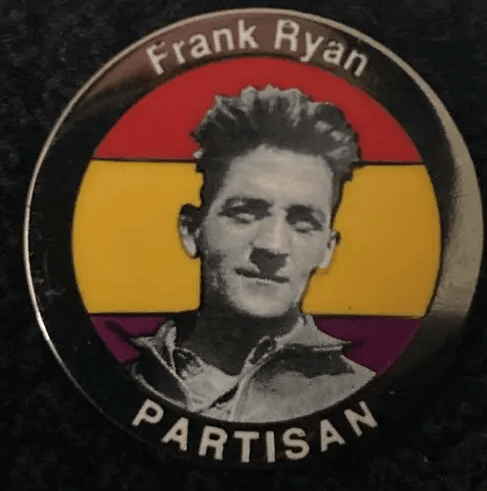 This unique custom made badge celebrates the republican socialist and anti-fascist Frank Ryan. His life is featured in the series Partisans – Irish Experiences in the Spanish Civil War

Born in Limerick, Frank Ryan rose to prominence in Ireland in the early 1930s as a leading figure in the IRA. Increasingly left wing in his views, he split from the IRA in 1934 along with Peadar O’Donnell and several others to form the organisation Republican Congress.

Ryan would most famously play a pivotal role in the Spanish Civil War leading a group of Irish republicans and communists to fight in Spain in December 1936. Whilst in Spain he would become the leading Irish antifascist of his generation.

Captured in Spain in 1938 he was sentenced to death given his prominence in the wider antifascist movement. An international campaign for clemency was launched and eventually his death sentence was commuted to 30 years hard labvour.

His final years remain shrouded in mystery. In 1940 he was turned over to German Intelligence Agents and taken to Nazi Germany. After a failed attempt to return to Ireland in 1940 he lived out the rest of his days in Nazi Germany.

His final days were tragic. Ryan remained an antifascist and a committed socialist. Yet he died a lonely death in a santoriam near Dresden in Nazi Germany in 1944. His body was returned to Ireland in 1979. Peadar O’Donnell delivered a eulogy at a memorial service. His case is examined in this podcast.

This unique enamel badge measuring 15mm in diameter, commemorates his involvement in the Spanish Civil War. The image is depicted against the Spanish Republican tricolour of red yellow and mulberry.