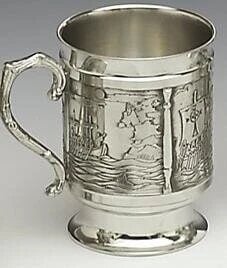 This pewter tankard depicts the story of 'St Brendan the Navigator'. Often referred to as "the Voyager", Brendan is believed by many to have been the first European to cross the Atlantic as early as the 6th century. His story is beautifully recounted in this pewter tankard handcrafted in Mullingar.

The watch is faced with a relief of Markievicz, her name along with the year she was born and the year she died. Made in Ireland, the keyring is crafted from pewter in Mullingar.